A classic for anyone that had a SNES.  This was a re-release of classic NES Mario games (1, 2, and 3) with upgraded graphics and sound.  Also included was the Lost Levels, which was Super Mario Bros. 2 in Japan.  There was also a version  of All-Stars that included Super Mario World.  This audio collection is of the original and thus lacks Super Mario World – that title deserves its own page anyway.  I certainly enjoyed reliving the NES classics on my SNES, but I always felt the controls were a bit slow…especially in Super Mario Bros.  SMB2 and 3 seemed ok though. 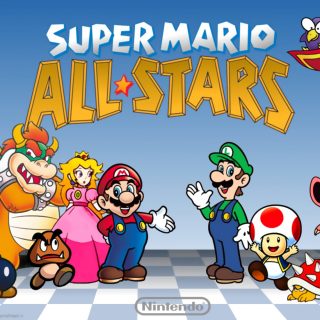 In its beginning, Kalisto was hosted on a Pentium III 500MHz PC running Windows 98.
Kingdom of Kalisto launched on September 21, 2001.
You can open images in a new tab/window to bypass the “SwipeBox” and load the image directly.
The Kalisto name originated in 1997 as a location in a graphics calculator RPG game I wrote in high school called Mystic Realm.
The first version of Kingdom of Kalisto was written in Microsoft Word 2000.